How to: Get Reports on MSIX/APPX App Inventory in SCCM

Another important aspect that plays a major role in infrastructure management are: REPORTS. Particularly when making a decision about the infrastructure, having a reliable report is very convenient, so there are many of them present in SCCM (most recently known as MECM).

Although software reports are common, with the arrival of new technologies such as MSIX and APPX, getting the right reports could be a complicated process. To help you solve this obstacle, let's look into various options to create a report of MSIX and APPX packages in SCCM (MECM).

Something to note: The reports will differ between standard packages ( MSI/EXE) and the new MSIX/APPX. At this time, there's a lack of distinction between MSIX and APPX applications. In case this is needed, the only way to achieve this is to browse each application AppxManifest.xml and figure out which is which.

SCCM has a pre-built report that shows information related to MSIX/APPX apps that have been installed on client devices. 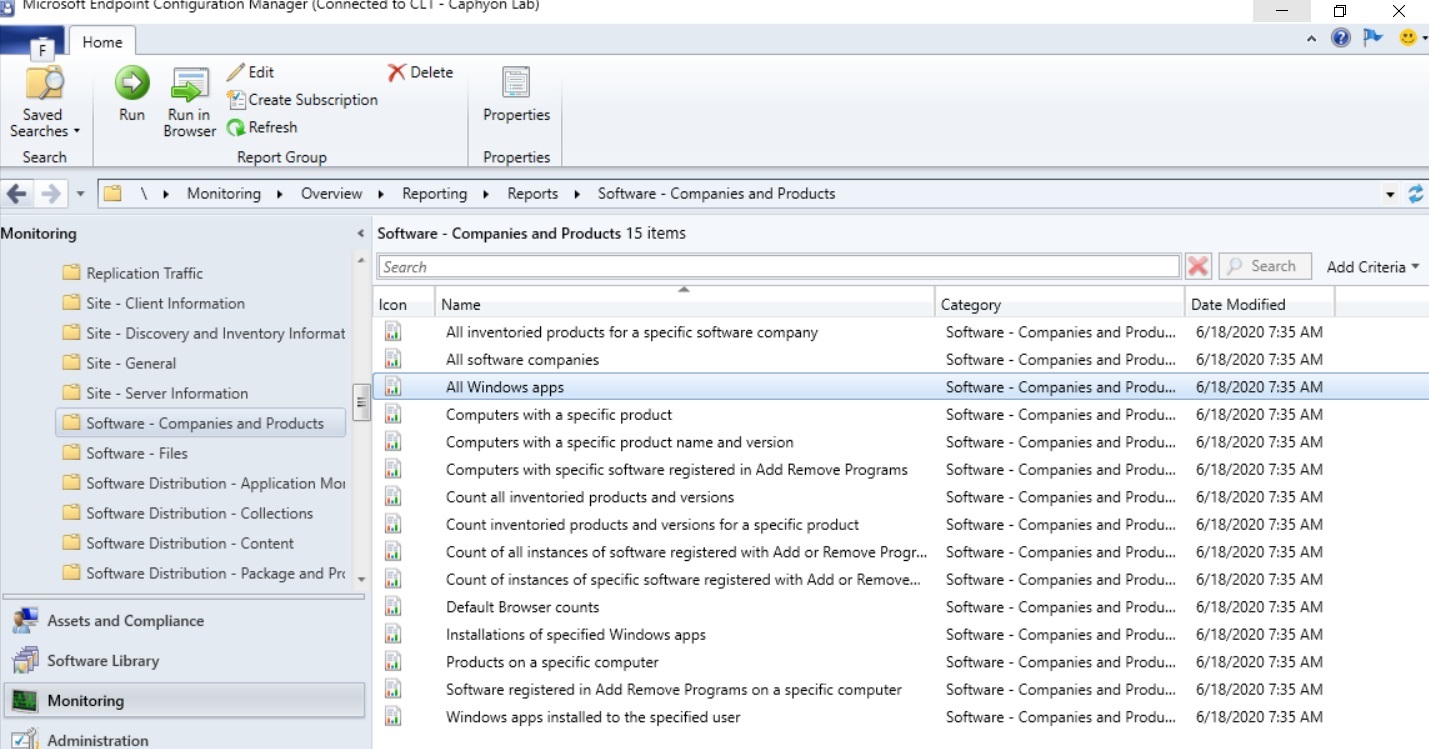 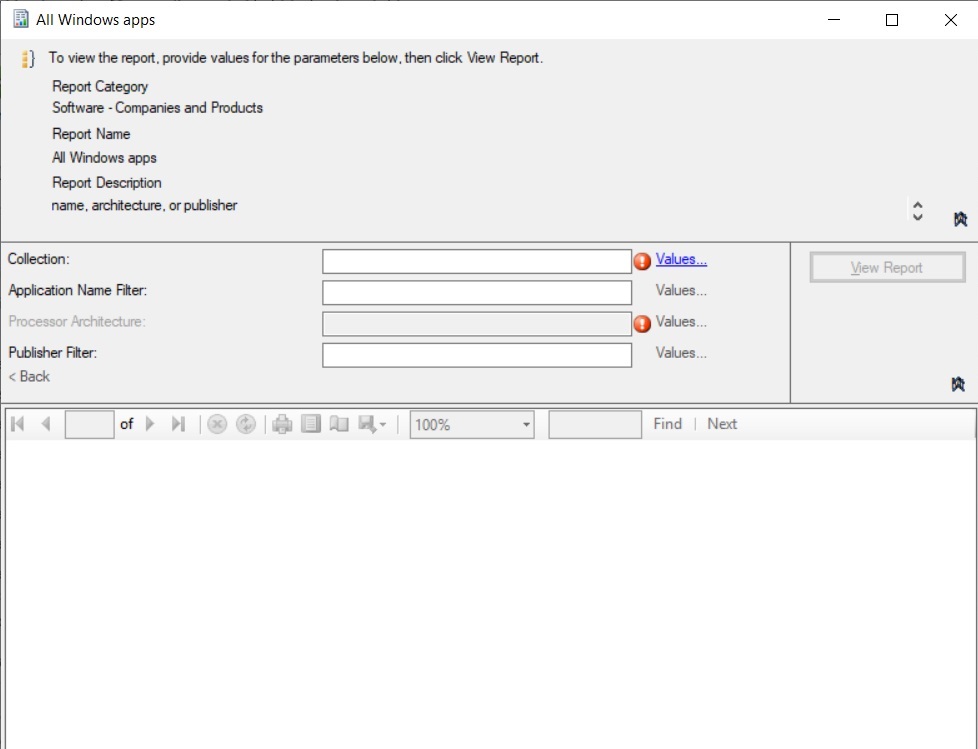 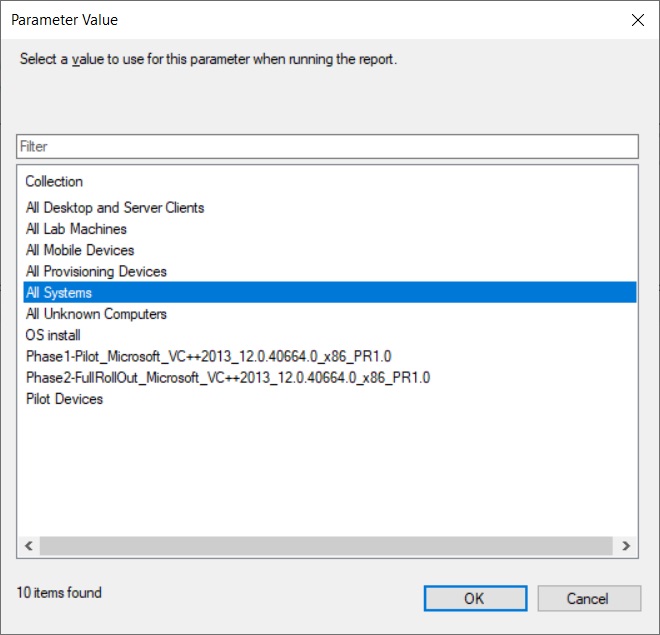 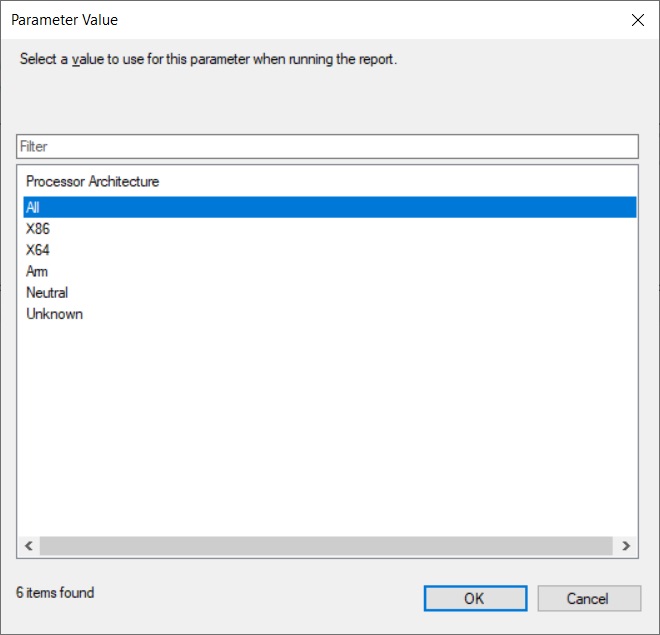 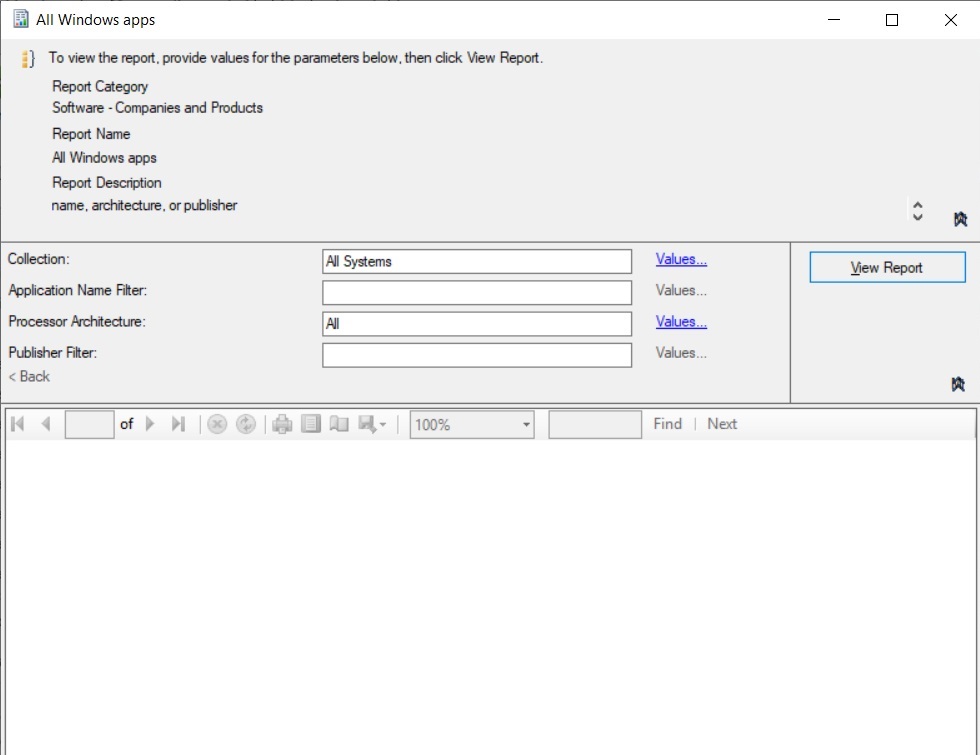 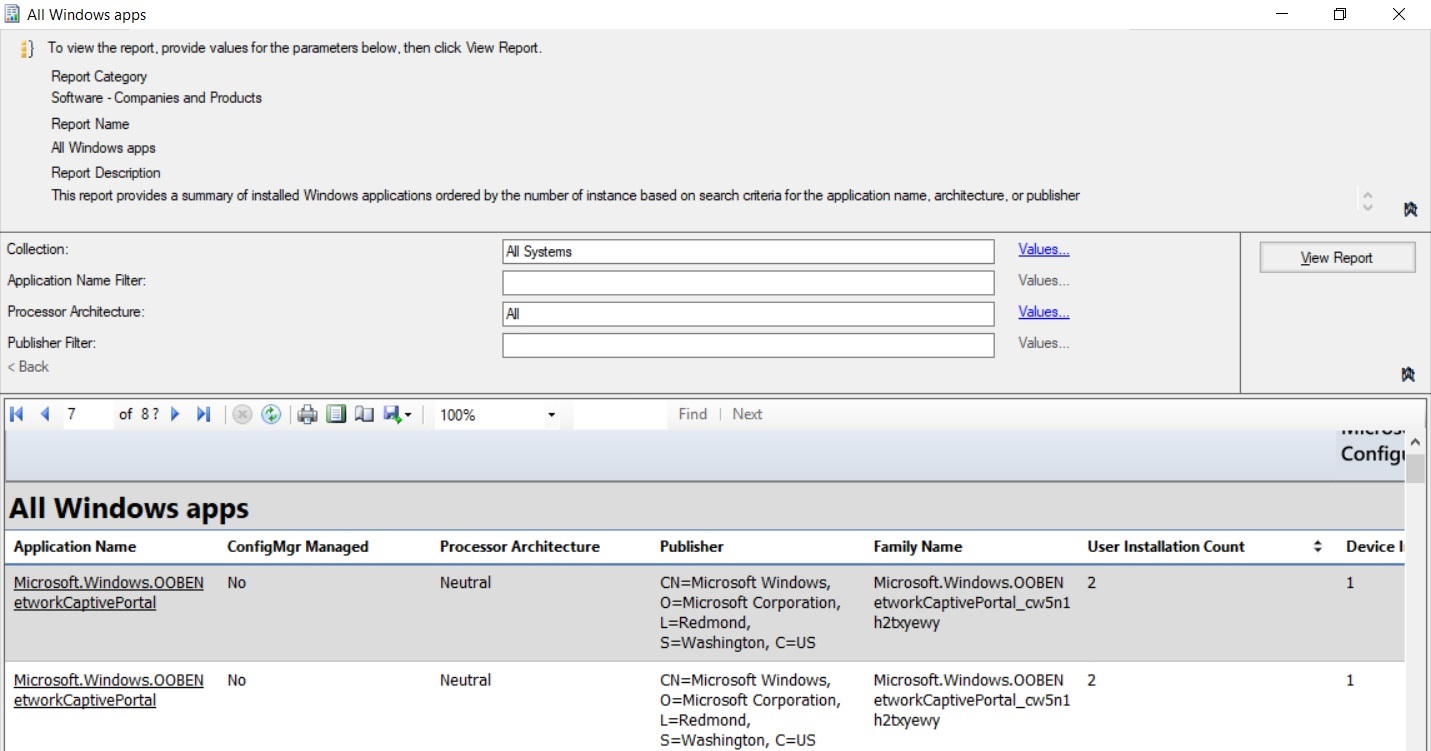 Custom Queries in SCCM for MSIX/APPX

If the default report is not suitable for your needs, SCCM also offers the WMI class SMS_G_System_WINDOWS8_APPLICATION to create custom queries.

Let’s have a look at two examples of how this WMI class can be used.

To get all the MSIX/APPX apps with the WMI class: 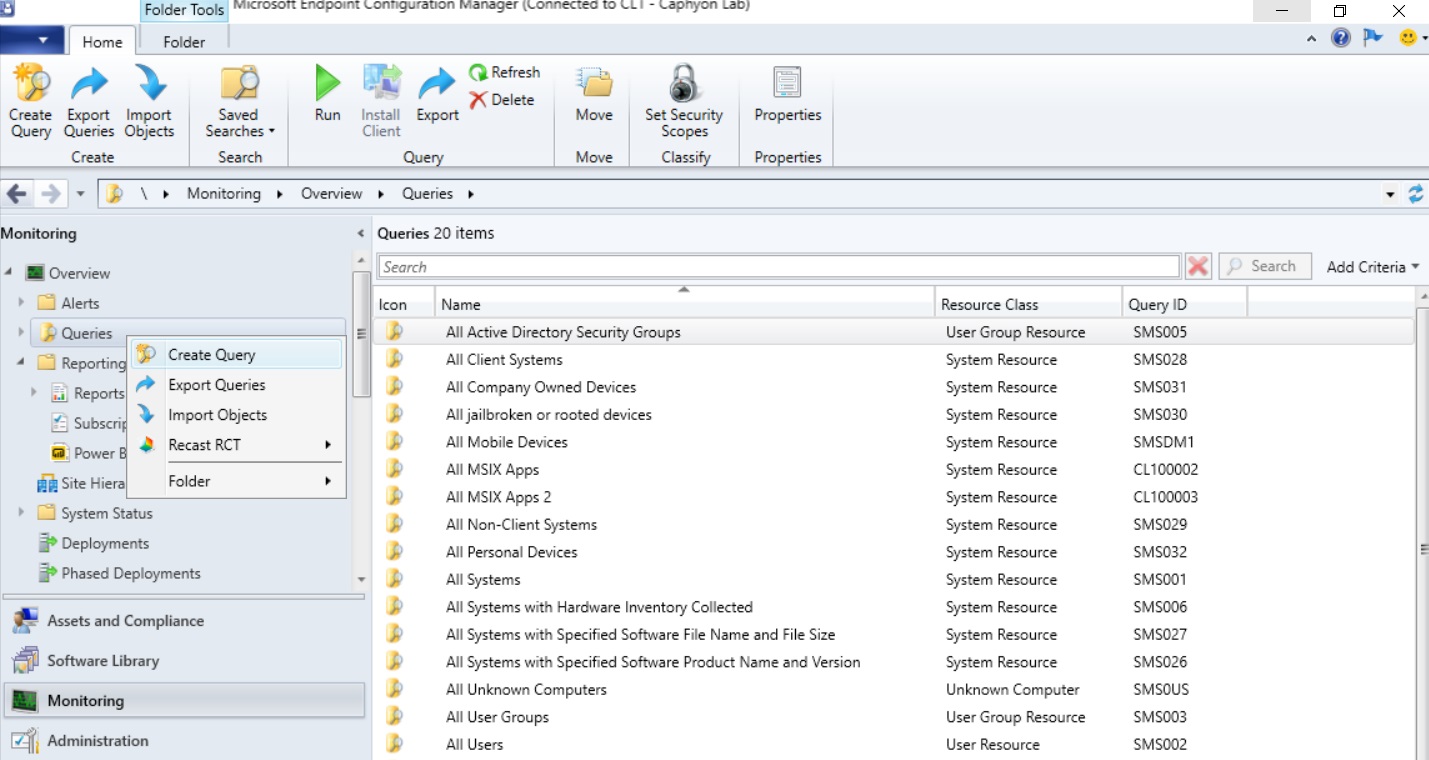 You can limit the query to a specific collection as we did for the default report. In this case, we did not limit anything to retrieve all the apps from all the available computers. 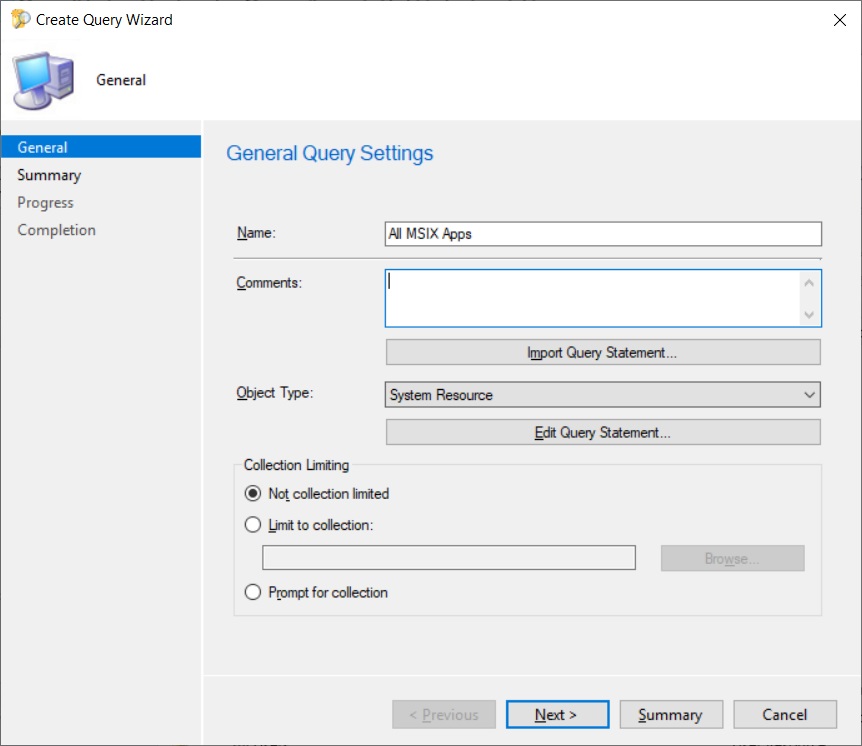 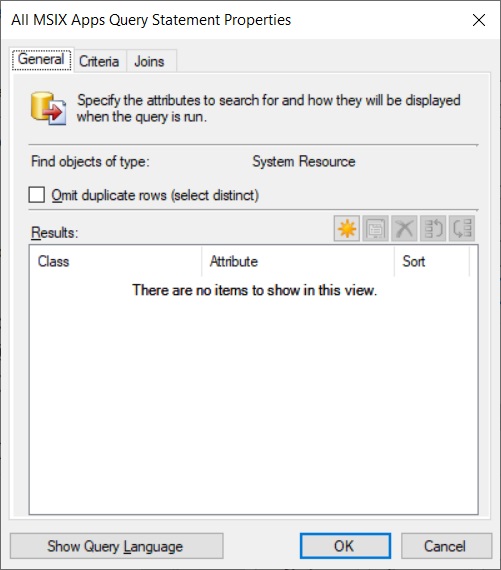 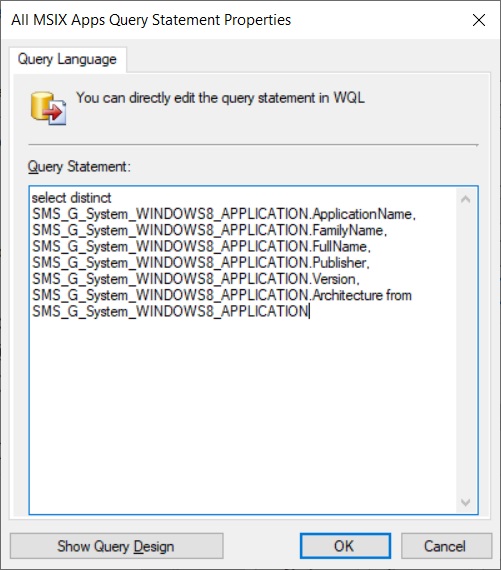 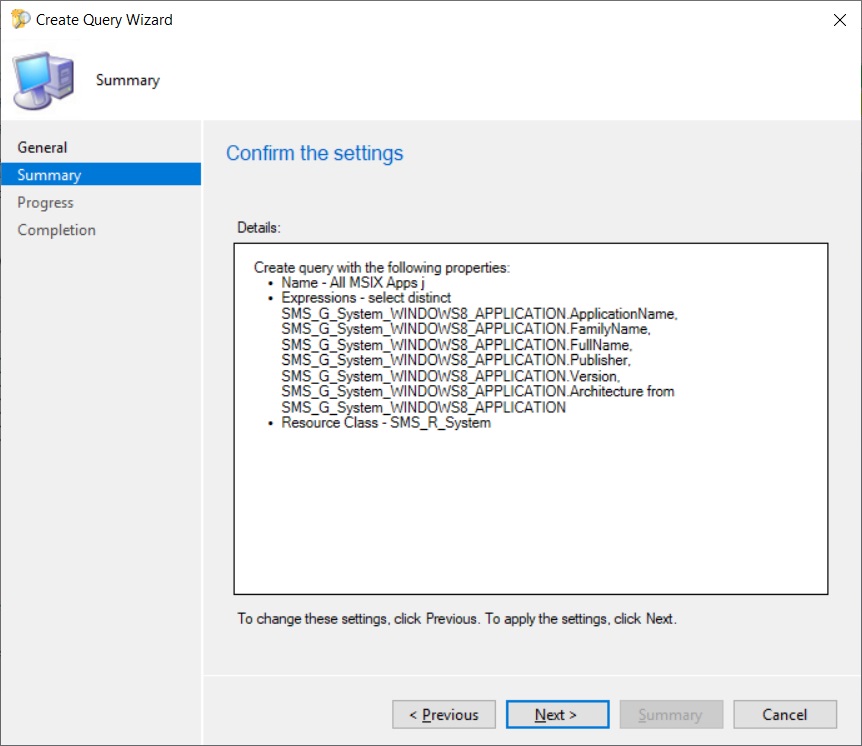 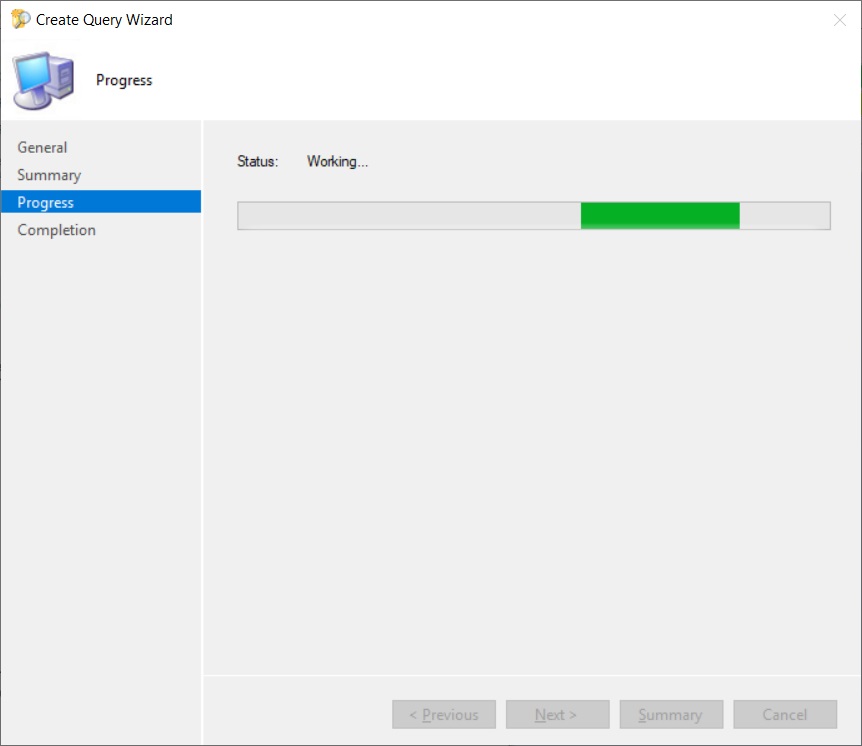 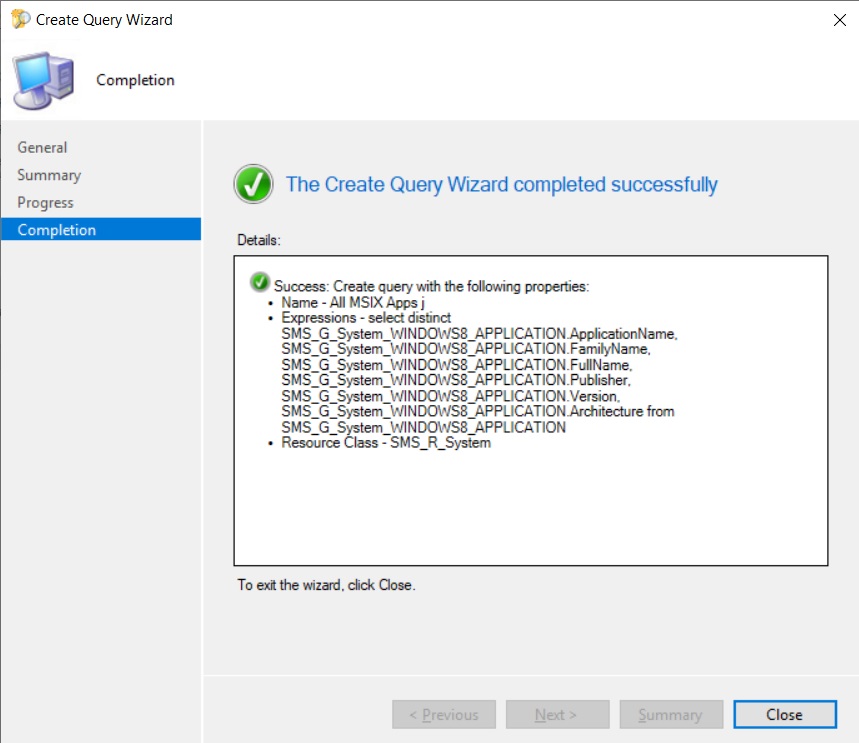 You have now created the query. This one shows all the distinct MSIX/APPX applications in the infrastructure with the following details:

When you execute the query, the output should look like this: 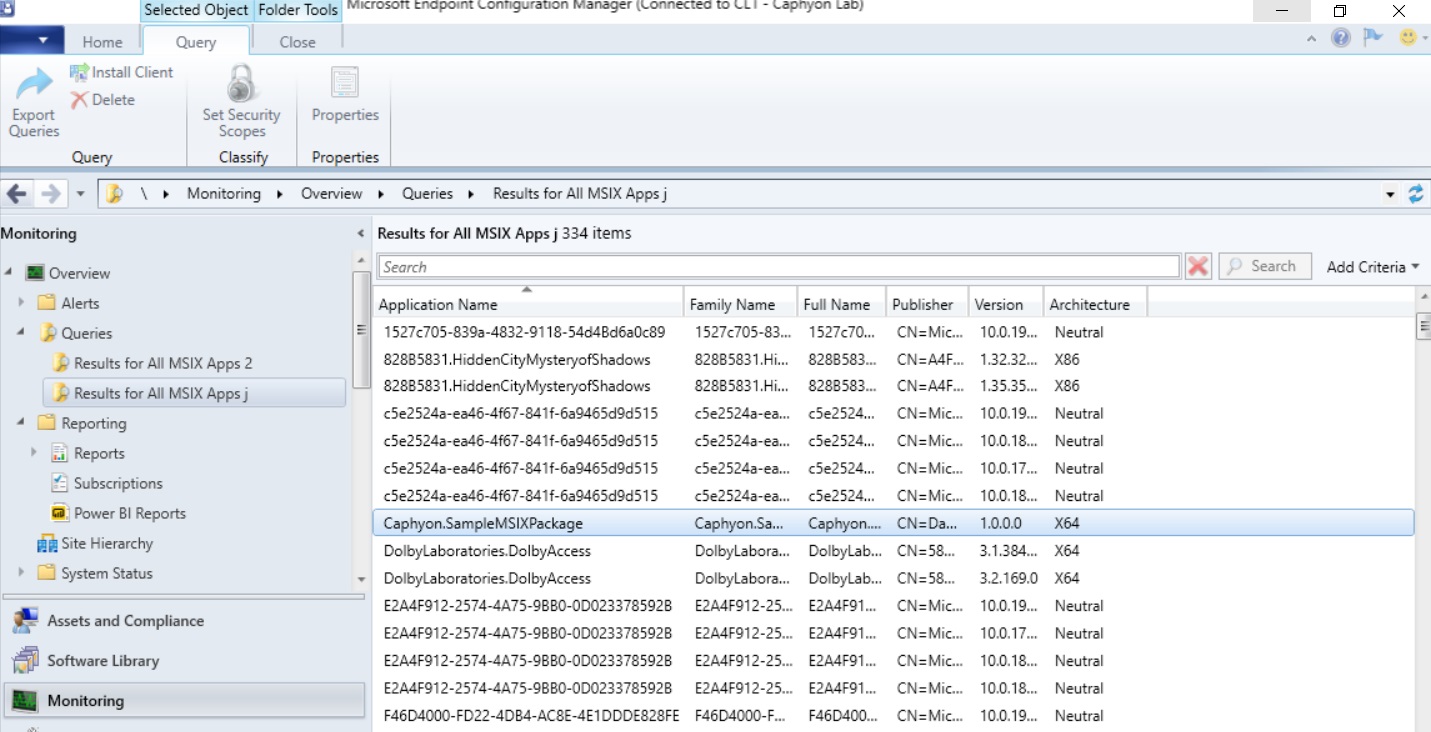 A common query that is helpful in managed infrastructures is finding the number of devices that have a specific application installed.

This can be easily found with MSIX/APPX apps. All you have to do is repeat the same steps mentioned above, but make a quick change on Step 6. When you reach Step 6, paste the following code: 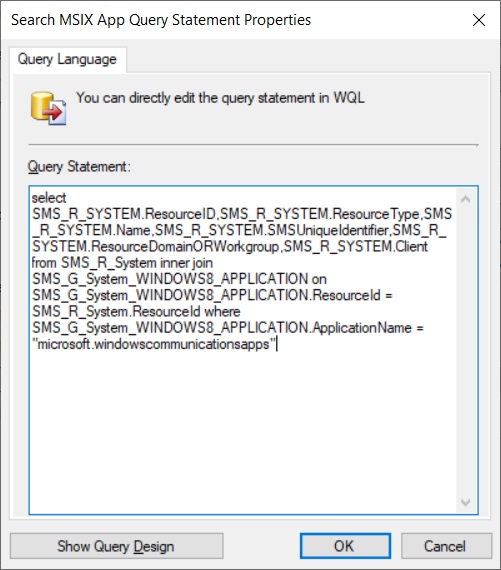 What we are doing is an inner join between the SMS_G_System_WINDOWS8_APPLICATION and SMS_R_System WMI classes on ResourceID.

We are then showing only the systems where an MSIX/APPX application with the name microsoft.windowscommunicationsapps is present.

In the end, when the query is executed, it should produce something like this: 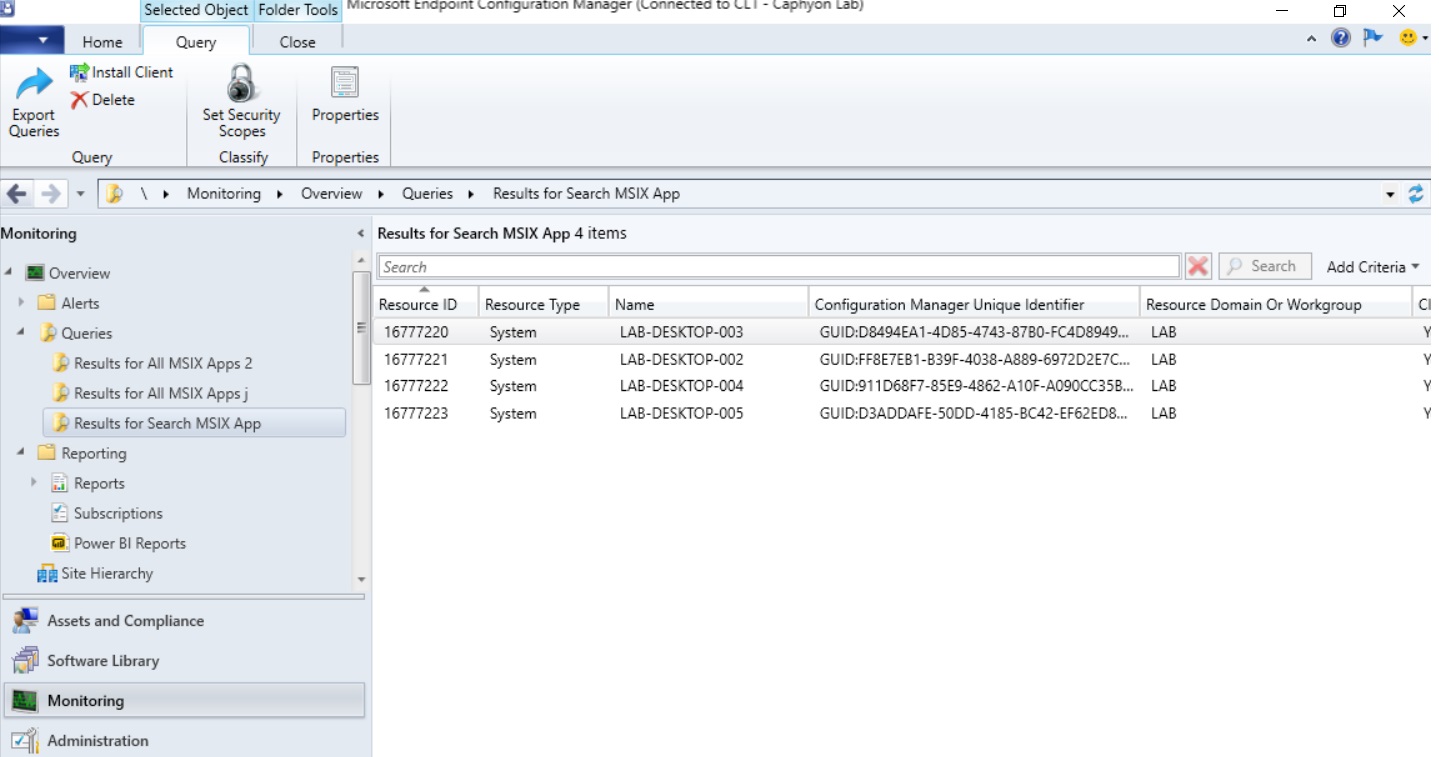 If you want to go deeper and don’t want to use any of the SCCM pre-built reports or custom queries, you could always browse the SCCM database and perform queries directly through it.

For some, creating queries directly in the database is easier because it uses MS SQL, unlike SCCM queries which require WQL (WMI Query Language).

The SCCM database provides the v_GS_WINDOWS8_APPLICATION view, which outputs all of the needed details about MSIX/APPX applications from the infrastructure.

A simple query like:
Select * from v_GS_WINDOWS8_APPLICATION, shows all the inventoried applications in the database. 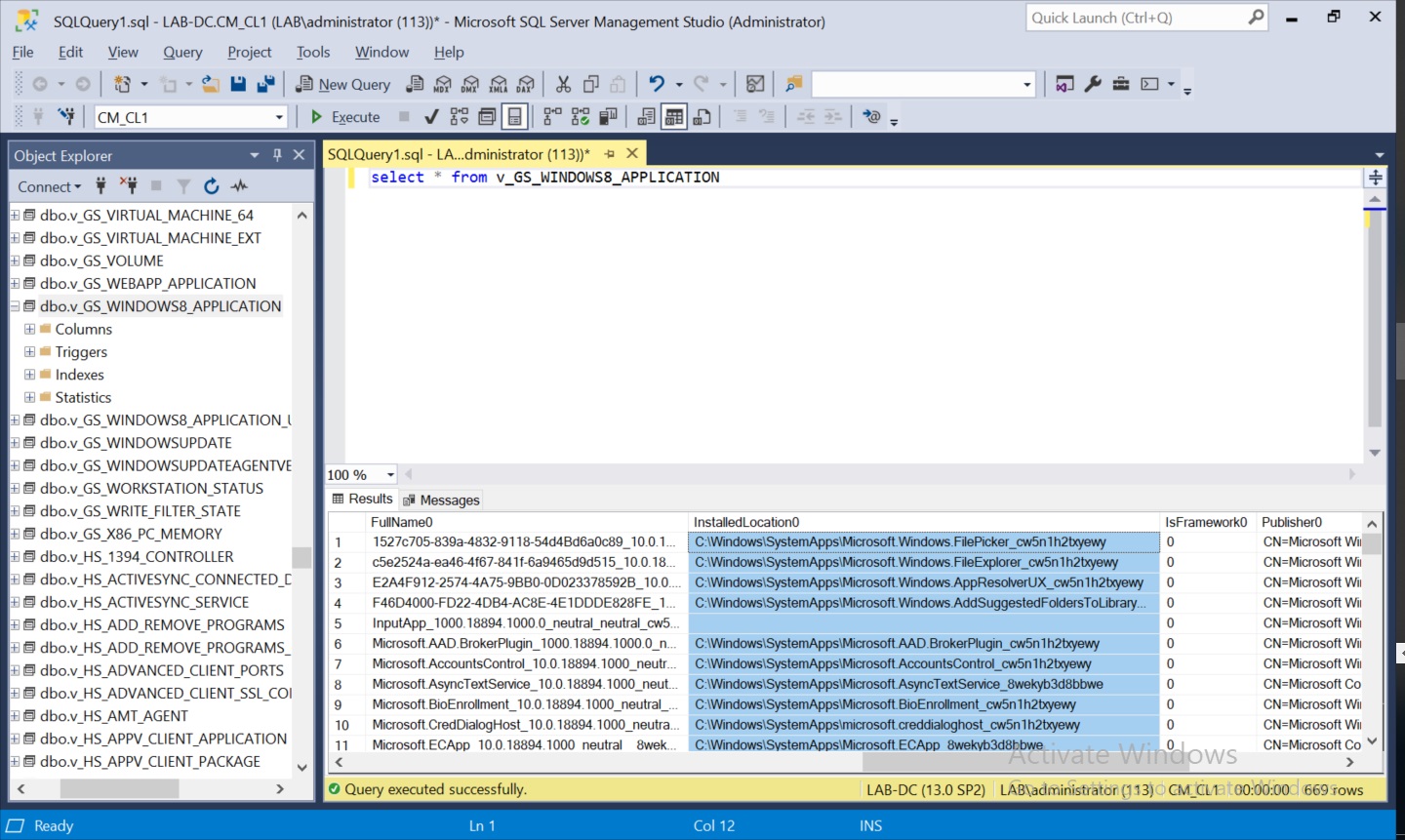 You can also create larger and more complex queries using this same option.

SCCM provides multiple options when it comes to getting data about MSIX/APPX applications in your infrastructure.

You can use pre-built reports, custom queries and even search the database yourself to get the information that you need.

We hope you found this information useful, we'd love to read your thoughts and suggestions in the comments below.