Web protocols are not something new to the table. We have been using them for years, and they make our life a bit easier.

One of the most popular web protocols is the tel protocol. It works by inserting a simple link in your webpage like this:

When a user clicks this link on a mobile device, it automatically brings up the dialer with the phone number prefilled, improving user experience and facilitating direct contact.

With the Windows 10 Anniversary Update, Microsoft introduced the option to initiate UWP installs from the web via the App Installer.

And so, a new protocol activation scheme has been added to the OS to invoke the App Installer. The mechanism is browser-independent, which relieves the pressure for the web developers to test the scenario on multiple browsers.

As MSIX uses the App Installer service, the protocol added by Microsoft for UWP installs applies to it as well.

How to add the MS-AppInstaller protocol to your website

If you want to host your MSIX package on your website and use the App Installer protocol activation scheme, all you need to do is to add ms-appinstaller:?source= in your links:

Here’s an example of adding the protocol to your download link:

For a quick demo on how to add the protocol to your download link, check the video below:

When clicked, the Install button invokes the App Installer automatically. Almost instantly, we are presented with the details of the package like the name, publisher, version, and other information that might appear.

When a user clicks to install, the content is gradually downloaded from the website and placed on the user machine, thus reducing the hardware space needed.

The ms-appinstaller protocol is already defined on Microsoft Edge and Internet Explorer to open up the App Installer, so everything works as previously stated. However, on third-party browsers, additional dialogs might appear.

For example, on Firefox, you first have to define that the ms-appinstaller protocol is handled by default with the App Installer by checking “Remember my choice for ms-appinstaller links”. 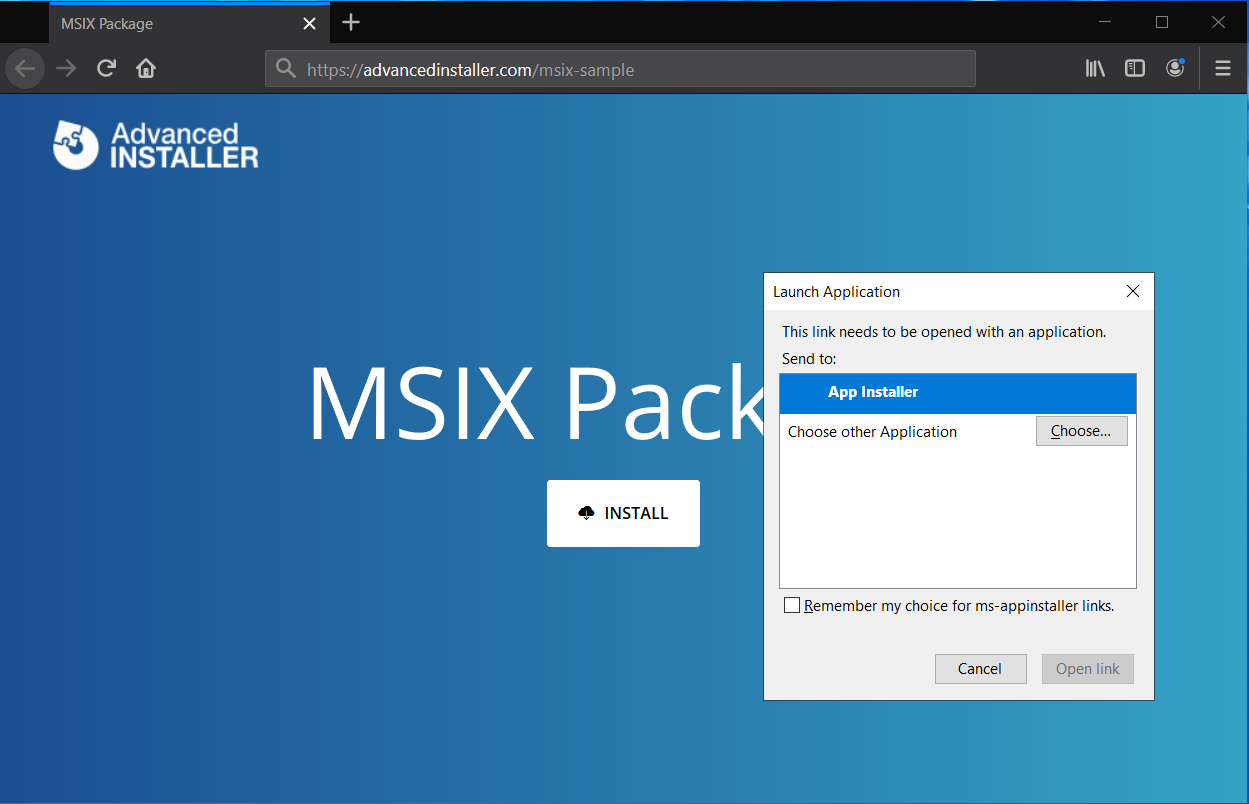 The same situation applies to Google Chrome since the ms-appinstaller protocol is not defined to be handled by App Installer by default as it is with Microsoft browsers.

To avoid unnecessary dialogs, you can check the "Always open these types of links in the associated app" option to suppress further additional popups.

Unlike in the past, when the package needed to be first downloaded and then executed, with this new web protocol, Microsoft makes it easier for developers to offer the package on the website, and for the users to get it smoother and faster on their machines.

Have you used the MSIX installation in a web environment yet?