This dialog allows you to change the tab order for controls on the dialog. 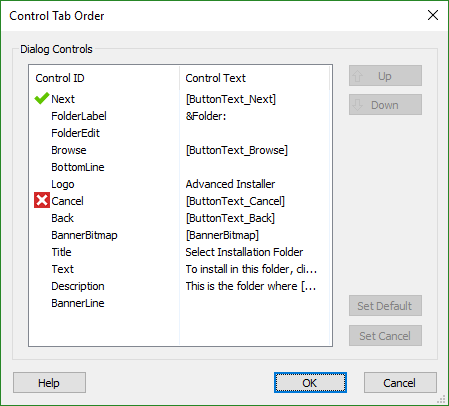 This list contains all the controls that are on the dialog. The order of the controls in the list represents the order in which the controls were created. Also, this order gives the tab order of the dialog at run-time as well as the Z-order. Use the [ Up ] and [ Down ] buttons to modify this order. If two controls overlap will be visible the one who is lower on the list.

Make the current control the default control of the dialog. By default, this control is focused.

The Default control must be a push button.

Make the current control the Cancel control of the dialog.

The Cancel control must be a push button.

A control can be simultaneously Default Control and Cancel Control for a dialog.