Path Variables are used to specify locations on the file system. The project resources' location may be specified relative to these path variables. In this manner, you can avoid references to a hard-coded location on your file system which are very hard to maintain for every resource.

Global path variables can be used in multiple projects 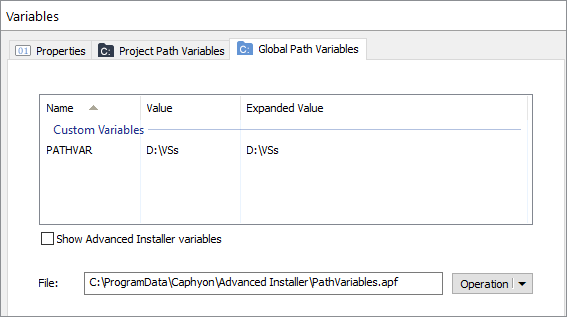 Changing a path variable on one machine can help you change the path of all the resources that use it. In the end, path variables still resolve to absolute paths.

Path variables are used during the development of your installation project. They do not apply to the target computers where the package is installed. Thus, they cannot be used instead of formatted references.

This field displays the path to the XML file that contains the user-declared path variables.

This combobox contains the following options:

This command enables you to select and import an XML file which contains path variables. Once an XML file is imported the "Path:" field will be populated with its location and the imported variables will appear in the "Path Variables" listbox.

This command lets you save the previously declared path variables. Only the custom declared variables (global variables) will be saved in the generated XML file. Advanced Installer variables and System Folders variables will not be included. If no custom path variable is declared, running this command will not generate an XML file.

The path variables declared in this dialog are actually created once the "Edit Path Variable" Dialog is closed by using the [ OK ] button. Therefore if you want to export them in an XML file it is recommended to first create the variables and then use the "Save To..." command.

This listbox displays all the path variables available to be used in the current project. It contains two fields:

Use the [ Delete ] button, the “Remove” context menu option or press the Delete key.