This tab allows you to define how the paths used in the project are handled. 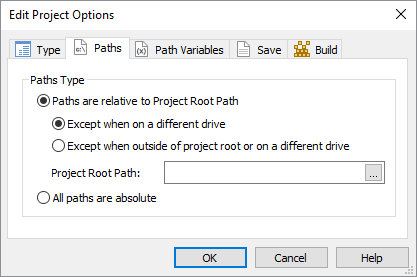 Every file or folder you specify in the project has a source path assigned to it, which is saved in the project file. The path can be stored in two forms:

Having an absolute path for each file allows you to move the project file (.AIP) anywhere on your disk (even on different partitions). The application will still be able to find all the files. But the project file cannot be moved to a different computer, unless you have the files in the exact location (and drive) as on the original computer.

With relative paths, you can easily move all the files used in your project to a different computer. Relative paths are relative to the “Project Root Path”. This can be user-specified and by default it is the path to the folder containing the project file.

Not all the files from a project can use relative paths. For example, files on another partition or drive must use absolute paths. Alternatively, paths outside the “Project Root Path” can also be stored as absolute.