The following article uses options that are available starting with the Enterprise edition and project type.

The following tutorial will guide you step by step in creating your first package with billboards.

1. Add a Billboard Host to your dialog

Billboards are used in installation packages as a way to advertise your application's features (in text and images) during setup. Billboards are most typically associated with progress actions during a lengthy operation.

As billboards most common use is to display images or text during a long operation and the billboard host control is automatically subscribed to the SetProgress event, we have chosen the ProgressDlg dialog as the target for the billboards.

Switch to the Dialogs page and select the “ProgressDlg” dialog in the tree.

Use the [ Global ] > [ Controls Toolbox ] toolbar button to select the “Billboard Host” control and place it on the dialog.

There must exist at least one billboard for your billboard host, so a billboard is automatically created for you and associated with the “InstallFiles” standard action.

Now it is time to add some controls to your billboard. These can be texts, scrollable texts, images, icons, group boxes, lines.

Add controls to your billboard the same way you add them to a dialog. Place them directly on the surface of the host.

Arrange them as follows: 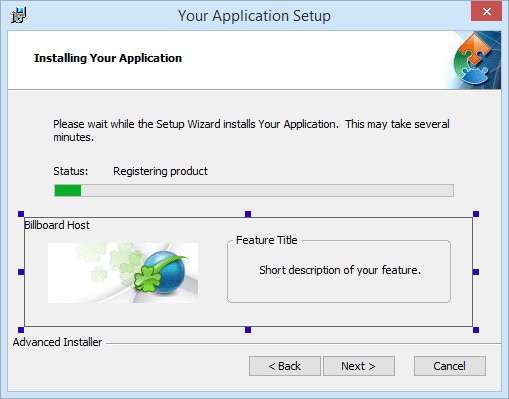 Build and run the project.

If your installation takes little time, the billboards will only be visible briefly.

If you would like more than one billboard to advertise your installation select the “Edit Billboards...” option from the context menu of the Billboard Host control. The Billboards Dialog will be displayed allowing you to create and edit more billboards.

Add a second billboard and configure it as shown below: 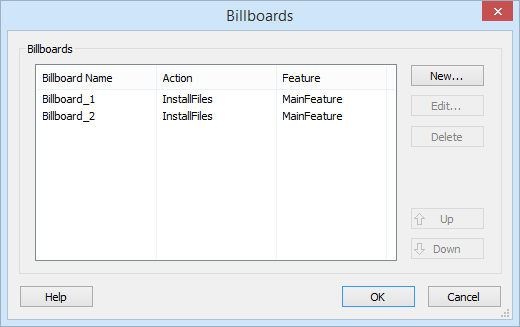 Initially all new billboards are without controls.

You can change the active billboard (the billboard that you want to edit) by selecting it in the Properties Pane, in the “Billboards” field.

Both in the Billboards Dialog and in the “Billboards” field combo the billboards are displayed in the same order they will be shown at run-time.

Add more controls to your new billboard in the same way as before.

4. Run your MSI with billboards

Build and run the project and notice the results. During installation the billboards will look like this: 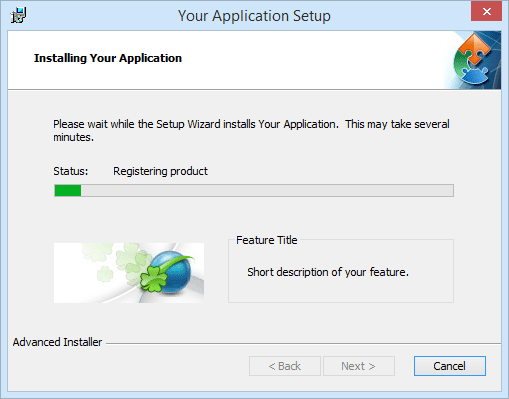