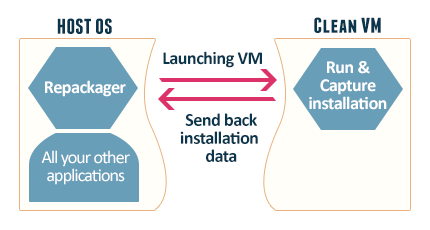 Besides getting very accurate results, VM repackaging provides another important advantage, i.e., it dramatically reduces the time it takes to repackage and test an application. This is done by the use of snapshots from the VM, our repackager can use existent snapshots or create new ones on the fly, so for you it will be like running directly in the host OS but without having to clean-up the application that got installed during the repackaging operation. This is done automatically by the repackager, as part of its VM snapshots management system.

If you have only VMware Player, i.e., no VMware Workstation, installed on your machine it is mandatory to install VIX SDK from VMware. If VIX SDK is not installed the repackager will not be able to connect with the VM player.

The tutorial for repackaging using VMware VMs shows you step by step how you can capture, edit and build your legacy installations into standard MSI packages.

The tutorial for repackaging using Hyper-V VMs is another example of how you can convert legacy installations into standard MSI packages.

To avoid having to install the tools every time, just copy and install osprovision.exe from the following location, then save the snapshot: