This tab allows you to configure the selected SQL script. 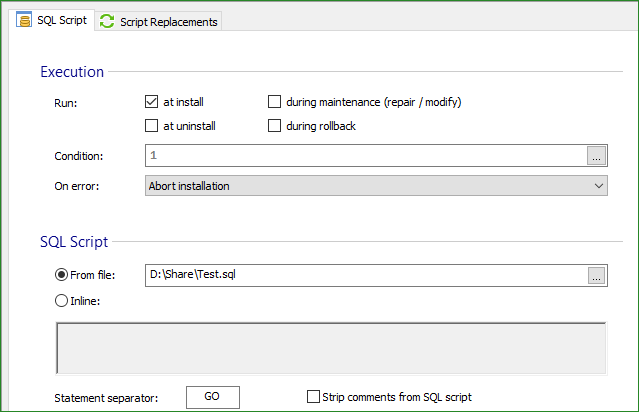 The SQL scripts of an SQL connection are executed in the order they appear in the tree (top-down). To change the execution order, move them by drag and drop in the tree.

Select when the SQL script should be executed. You have three options:

The changes made by an SQL Script on a database cannot be undone. Uninstall won't rollback the changes performed by the SQL statements. You will need to supply, if necessary, SQL scripts scheduled to run at uninstall or rollback that will undo changes made by the scripts ran during install.

If none of the SQL scripts assigned to an SQL connection is to be executed due to their condition or scheduling, that SQL connection will not be triggered.

In case of error

Specify the action that should be taken if an SQL script error is encountered when the script is executed.

Use the embedded editor to instantly create a script inline on the fly.

Specify the separator for the SQL statements.

Some Database Servers do not permit executing multiple statements at once. In this case supply a statement separator to indicate that the SQL queries should be executed individually. For more information please read Why does my SQL Script fail to run when executed from the installer? FAQ.

Make sure the SQL code you supply is well-tested before deployment. If errors occur during installation, the changes cannot be undone. This functionality assumes familiarity with SQL syntax. Advanced Installer Technical Support does not provide assistance with debugging SQL statements.