Advanced Installer has the ability to build MSI packages in various languages.

The information presented in this article can be applied in a similar fashion to Languages Tab from Visual Studio Extension Project, Modification Package Project, Merge Module Project and Updates Configuration Project. 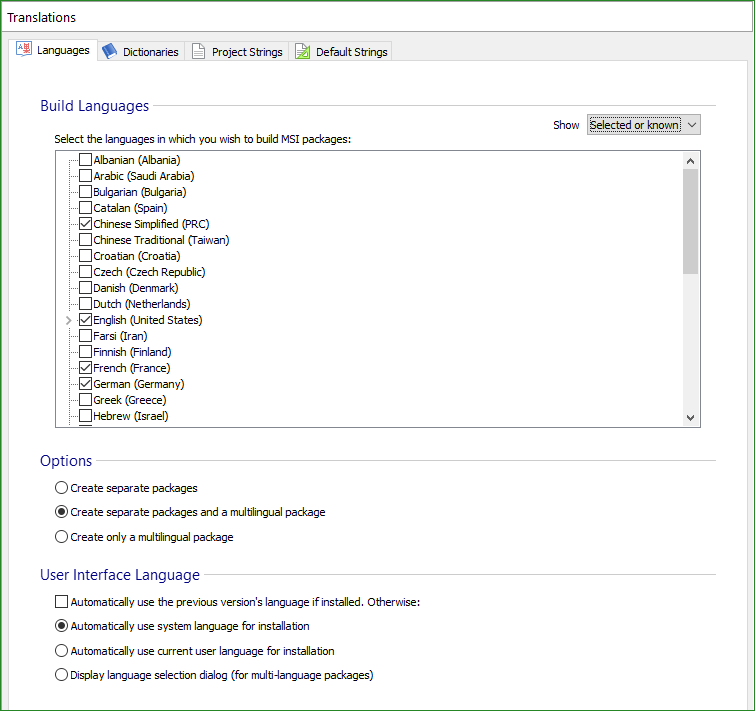 Check the check-box button next to the desired language in the tree. For each language a separate MSI package will be built with the code page set to the default ANSI code page of that language.

Mac OS X has a native support for multi language bundles so the resulted package will contain the translations for all languages.

The languages must be specified independently for each build. You can select the desired build in the toolbar builds combo. This option is enabled only if several build are defined.

The language in which the project was created in the Start Page is set as default. This language must be used by at least one build. Any build must have at least one language. The languages are grouped by their relation.

Each language increases the package size with about 40 - 50 Kilobytes (depending on the strings it contains).

If you select a language without translations build in, Advanced Installer will try to get the translation strings from the closest related language. This may be or may not be what you want. The Neutral language (ASCII US English) is used as the parent of all languages and generic fall back.

This section allows you to set the language selection method used by multilingual packages. To set this option you need to have an EXE as output package.

The installer will try to use the previous version's language, if it is found on the system. Otherwise, it will proceed with using the language specified in the radio group below.

Automatically use system language for installation

Use target system language during the installation.

Use current user language during the installation.

If this option is enabled the user is prompted to select the language that will be used during the installation. The prompt dialog can be customized from the Pre-install UI section in the Dialogs Page.

As of version 8.1 of Advanced Installer, when an automatic upgrade occurs, the already installed package's language will be automatically used instead of displaying the language selection dialog.