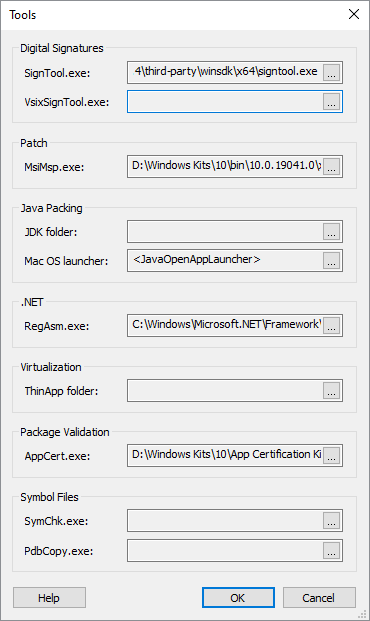 This option defines which tools are used by Advanced Installer to digitally sign the setup packages.

Advanced Installer will use by default an internal signtool.exe binary with all the necessary dependencies from the latest Windows 10 SDK (version 10.0.19041.0 or newer).

You can also manually select a custom path of SignTool. Only SignTool with version equal or greater than 10.0.1 is supported. If a path of an older version of SignTool.exe is selected, the path will not be saved and the default path will be used.

On Windows 8.1 and earlier operating systems, Signtool.exe requires Update for Universal C Runtime in Windows to be installed on the build machine.

Specify the full path to VsixSignTool.exe after you install it with NuGet. This tool is used to sign VSIX packages.

MsiMsp.exe is a tool used by Advanced Installer to build Windows Installer Patches.

These files can be downloaded for free from the Microsoft Web Site and they are part of Windows SDK.

The JDK (Java Development Kit) is required by Advanced Installer to verify the signature of the JAR files that are packed using Pack200.

The Mac OS Launcher is the Java Application Launcher used in your Mac OS build by the java products that are using Oracle VM. If you specify a custom launcher you should define its custom settings using the MacOS Java Launcher Properties page.

RegAsm.exe is a tool used by Advanced Installer to register a .NET Assembly for COM Interoperability. This tool is part of the .NET Framework.

When necessary, Advanced Installer attempts to find the executables itself. In case of failure, you can specify the exact locations here.

PdbCopy.exe is a command-line tool used by Advanced Installer that removes private symbol information from a symbol file.