How to deliver a file to all users profiles

The following article uses options that are available starting with the Professional edition and project type.

Let's assume that you need to deliver a file into a custom folder from the AppData of each user registered on the machine. e.g. C:\Users\aUser\AppData\Roaming\aFolder\

To install files or create sub-folders in the user profile folder you can follow the steps below:

To deliver a file to all users profiles, two approaches can be used:

Self healing is one of the main features of Microsoft’s Windows Installer technology. Self healing leverages the windows installer database to allow a full or partial reinstallation of a managed product if the installation somehow becomes broken or corrupt.

When the application is installed, the self-healing feature is automatically activated if the application is launched through the advertised shortcuts. Since the shortcuts point to a file from a feature, only the components in this feature can be repaired. Therefore, if one of these components is missing, Windows Installer will trigger an auto-repair for the entire feature.

For details, please take a look on the How do I implement self-healing into the application? article with related information for hints and guidance.

Windows Active Setup is a mechanism for executing commands once per user early during logon. When the active setup is used, the following keys are compared:

Use the [ New Value ] toolbar button to populate the registry key with the following values: 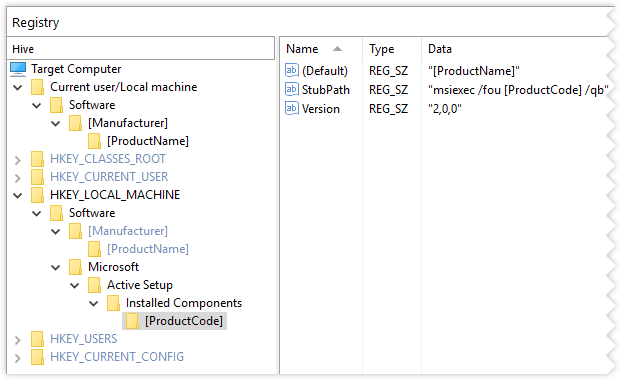 When each user logs on for the first time after an Active Setup has been configured in HKLM, the operating system compares Active Setup keys between HKLM and HKCU, and runs the executable if the HKCU entry is missing or the version in HKCU is less than HKLM. To update the ActiveSetup executable, just install a new version, and increment the Version registry key (second registry entry above). Next time the user logs on, the active setup will run again for that user.